History and Movement Of Mixed Martial Arts by Samir Zarrouki 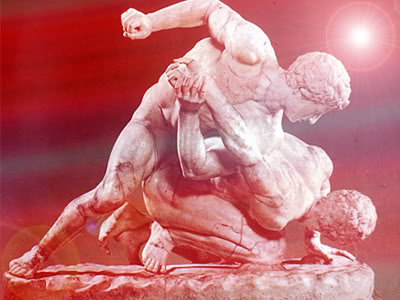 Pankration was the first Mixed Art

Purpose
The purpose of the research assignment is to track through geography and history the drivers of the modern sport of Mixed Martial Arts (MMA). The real focus is in the sport and its contributing styles and movement through time and space; how MMA became the sport it is today. An important factor is the “Mixed” portion of the sport which is the cornerstone of the sports novelty and importance.

Pankration is the very first Mixed Martial Art, a blend of boxing and wrestling, the two most ancient styles of fighting. The ancient Greeks took these two popular styles of Martial Art and blended them in an open combat sport. Pankration was the first Mixed Art, something of legend and started the trend of sport fighting transforming into military hand to hand combat. Modern pankration is a sanctioned combat sport. The first official introduction was by Jim Arvanitis in 1969 and globally in 1973. Arvanitis is credited by some to be one of the early drivers of modern MMA and is definitely the driver behind modern pankration. Pankrations contribution to MMA is in the form of Pancrase, a Japanese fighting league that encourages all aspects of martial arts and is modeled after the original sport. In Pancrase there are no pads on the hands but there are shin pads. Pancrase was introduced in 1993 and had a very high influence on the American fighting league, the Ultimate Fighting Challenge (UFC) as they entered their first king of Pancrase, Ken Shamrock.

The military aspect is very important because it is essentially the driver for the distribution of martial arts. It also drives the movement and evolution of the mixed aspect of martial arts. For the Greek military, pankration played a very important role as many soldiers, those not of noble blood, needed to buy their own weapons. The result of having to buy their own weapons, which were expensive, means that the knowledge of an unarmed fighting style was essential. The soldiers who could not afford weapons could be still effective with knowledge of pankration. The soldiers who were not nobles were often Olympians, many champion pankriatists or wrestlers. Many styles of martial arts are effective against armed or armoured opponents. Military units all needed to learn a form of unarmed combat. When a soldier loses their weapon it often means death for that soldier. When a soldier knows how to defend themselves without use of a weapon, then they have a second chance at life during battle. The importance of learning a style of self-defence is very high; martial arts fill that area of self-defence. The creation of a large number of martial arts is military based. The best examples of these martial arts, Muay-Thai, wrestling and Jujutsu play a huge role in the modern form of Mixed Martial Arts. The creation of these two martial arts have and essential role in the realization of Mixed Martial Arts.

The start of modern MMA can be traced back to the introduction of judo/jujutsu to Brazil. The man who brought this style of fighting over in 1914 was Mitsuyo Maeda, a Judo practitioner or Judo-ka from Japan.  He introduced his style to Helio Gracie the son of his Brazilian friend who then passed on the techniques to his brothers.  The Gracie family then reformed the techniques as Helio was not physically able to perform many of the judo throws because he had genetically weak joints and muscles. He reformed Judo to suit his body type, and make it effective for anyone to perform. From the reformed style Brazilian Jiu-jitsu (BJJ) was formed. It was called “jiu-jitsu” and not Judo because at the time Judo was still called jujutsu in japan.  The style that the Gracie family taught had a huge influence over the direction of modern MMA but it would be known until 1993 at UFC 1. The historic event of UFC 1, the first ultimate fighting challenge, catapulted the sport of MMA to a new height. UFC 1 was the beginning of the modern era of mixed martial arts. Royce Gracie won that tournament against many other men who were much bigger than him, using his family’s style of combat, Brazilian Jiu-jitsu. After that victory and many other UFC and Pride championship victories, both mixed martial art tournaments, people realized how dominant the combat style was and it became an essential part of MMA. On that night “he revolutionized the sport” (Joe Rogan, UFC commentator),the importance and influence the Gracie family had on and in MMA with the unimposing Royce, called the “Godfather” of Mixed Martial Arts by Dana White(UFC President), at the helm is what drove MMA into the mainstream of today.

To choose what was important to the global movement of Mixed Martial Arts as a sport the modern sport had to be broken down in a present-past fashion.  The theme followed was what are the most widely practiced and effective styles of martial arts that would drive the mainstream society to go out and practice this mixed style of martial arts. Also ineffective styles, speaking purely the styles that are popularly practiced yet ineffectively mixed into modern MMA had to be considered as drivers because they popularized learning a martial art or combat sport. Historical martial arts had to be included as well as they are the drivers that progress their sport and are taught around the world.  Global movement is an important aspect in choosing the mix of martial arts but just as important are the historical beginnings of the martial arts.  Wrestling, boxing and jujutsu had to be researched from their beginnings to their effect on mixed martial arts.

The hardest part of following MMA is the nature of its name. In the name “Mixed” plays a very important role. Deciding which Martial Art(s) to follow played a crucial role in determining the drivers of this sport.  To succeed at the sport athletes must learn many styles of Martial arts that translate into three stages of the modern sport. The stages are standing, clinch and ground. For an athlete to be successful they must learn all aspects and be masters of them all. The most successful athletes, like the Canadian George St. Pierre, are extremely adept at all stages. The importance of the learning and the effectiveness of the styles on display is what drives people to participate and grow the sport. For example when Royce Gracie won UFC 1 he drew people to learn Brazilian Jiu-jitsu. When Randy Couture (former light heavyweight and heavyweight UFC champion) won his titles he drew people to learn the clinch. All aspects of Mixed Martial Arts are important to be successful and to drive the sport forward as only in drawing in athletes can the sport grow.

The best way to determine the drivers is explained by Bas Rutten, a veteran and Pioneer of the sport, stated “Mixed Martial Arts is a triathlon” (Episode 9 Human Weapon). The triathlon of MMA is the standing phase (muay-thai/Kickboxing), the wrestling phase and the ground phase (Brazilian jiu-jitsu). All phases are essential for the practitioner or athlete to learn, knowing and mastering the basics of these phases is an art in itself. The importance of learning and combining these martial arts is the cornerstone of the sport. Any athlete who lacks experience or training in one area is not going to be effective in a certain phase.

The most interesting finding from a geography stand point is the west-east-west movement of the martial arts. It all started in ancient Greece with the Olympic sport of pankration.  For a long period of time there would be no official MMA until the 1920s in brazil when the Gracie challenge was issued to all martial artists to attempt to beat the new Brazilian Jiu-Jitsu style with any martial art they thought would beat the new martial art. The matches were first held in the first Gracie jiu-jitsu gym in Brazil but soon the challenge evolved into Vale Tudo matches. Vale Tudo means “anything goes” and most matches were held or made by Gracie family members or official practitioners of Jiu-jitsu.

Many people believe that martial arts are solely an oriental practice, but with the existence present in Pankration, it is clear that the base of mixing martial arts existed first in the first western culture and then moved westward in terms of competition. The timeline of MMA begins with pankration (Greece) and moves in chronological order of sport to vale tudo (Brazil), pancrase (japan), UFC (United States). The competition of MMA exists in large populations and centers of high prosperity, first world often western oriented countries. MMA as a sport flourishes in these areas producing the top athletes in the western cultures especially Brazil, the home of Brazilian Jiu-jitsu, which has 4 of the title holders in the UFC, the largest combat sport league at this time.

Throughout history fighting has been an important part of society. It has many styles, the most current and popular is Mixed Martial Arts. The earliest form was pankration in ancient Greece. That was the first time anyone had mixed two styles of fighting, or martial arts. Over time in the spirit of seeing which martial art was best the Gracie challenge/Vale Tudo was introduced in Brazil. Many practitioners of martial arts attempted to beat the challenge presented in the form of Brazilian Jiu-Jitsu. From pankration and Jiu-jitsu two mixed martial art leagues were born, Pancrase in Japan and the Ultimate Fighting challenge in the United States. The two leagues were the beginning and current form of the new Mixed Martial Arts. Combat sports have always been popular, none more so than now, it is the fastest growing sport in the world.