For many of us around the world Joe Rogan is best known for being the colour commenter for the UFC.  He’s a fantastic asset to the UFC organization and a great entertainer.  He’s been the host of  ‘Fear Factor’ and has starred in sitcoms such as ‘News Radio’ .  Although extremely entertaining as Joe Rogan is, there is another side to his persona.  He is an avid BJJ enthusiast training under the tutelage of Eddie Bravo, another JeanJacques Machado Black Belt.  Joe earned a ‘nogi’ black belt grading under Eddie Bravo earlier this year and now has just been promoted to a ‘Gi” BJJ black belt with Jean Jacques Machado.  We are really impressed with Joe’s accomplishments inside the Octagon helping promote and grow a fantastic sport, and we are equally impressed with his accomplishments outside the Octagon by earning a BJJ Black Belt with Professor Jean Jacques Machado.

We just recently had a visit this past May by professor Jean Jacques Machado and can honestly say he is one of the most inspirational and technical BJJ practitioners on the planet.  We are thrilled to be associated with a man of his talent and stature. 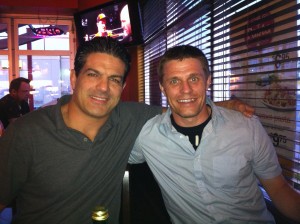