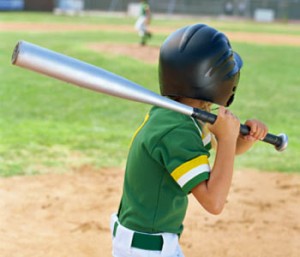 I always enjoyed sports. When I was little I signed up every summer for the
neighbourhood softball league. I really loved it, and played for nine
consecutive seasons. It wasn’t always the case though – there was a time
when I almost packed it in and gave up completely.

During my third season when the league exploded in popularity, I was the
veteran on a team filled with newcomers.  It was a cool, drizzly evening
when our team first crossed paths with the most skilled and dominant team of
the league. It’s fair to say, it didn’t go well.  We were outgunned and
under-equipped talent-wise to face a team of that calibre, and as a result
we were thoroughly trounced. The score was 27-nil. What added to the
humiliation of defeat was the fact that I was the pitcher for our team and
felt the brunt of the defeat. I believe I set the league’s record for most
consecutive walks that night.

Later, while walking home with my father I made my decision to quit. My mind
was made up and I absolutely was not going back! I was quite dramatic when I
informed my parents as I solemnly went upstairs to my room. A few days
later, before the next game my father had prepared my equipment and was
ready to drive me over to the Cummings Street field. I protested and
reminded him of my decision. He said, “I understand you were upset after
losing, but today is a new day and you made a commitment to the team. Now
let’s get going!” I instantly knew from the tone of his voice that this was
a statement, not a discussion to be debated. Needless to say I was very
unhappy and didn’t talk at all the entire drive. This pattern repeated
pretty well for the rest of the season. During the non-game nights my father
would spend an hour or two helping me practise my pitching skills. I was
somewhat reluctant to practise at first, but eventually came around. In
fact, my favourite memories from that summer were my practice sessions with
my father. The entire family got into the act as my older sisters would take
on the role of batters and catchers, and my mom would act as umpire. All in
all, it was really cool and the best of times.

I’d like to tell you that our team practised hard and got better over season
and eventually won the championships winning a trip to Japan to represent
our country à la “Bad News Bears” style. That would be completely untrue. I
think we may have tied a game or two and won one on default as the opposing
team didn’t have enough players. The real value of the ‘stick-to-it-ness’ my
parents taught me came many years later. I went on to play ball the next
summer and the following summer eventually made the All-Star Team that
competed against other leagues’ All-Star Teams.  By the end, I played nine
seasons of softball and the only reason why I didn’t continue was that the
league ended at 16 years of age.

To think, I almost quit after my third summer! I can’t imagine how that may
have affected me negatively and all the friends and good memories I would
have missed out on.

In retrospect my parents were “tough with me” – a good “tough with me.”
Although it was my choice to play softball every year, they made sure I
carried through with that choice. They were incredibly supportive always in
the bleachers at every game rain or shine, sick or not, weeknights or
weekends. They supported me in the good times but more importantly they
supported me in the hard times, by not allowing me quit. They knew that life
is full of ups and downs and some days are harder than others, and they
taught me to persevere. I’m extremely grateful to have ‘tough parents‘ who
never gave up on me even when I felt like giving up on myself.